So most dogs eat dodgy stuff.

According to research Man's best friend self-domesticated as they slowly evolved from the wolves that scavenged alongside us over 33,000 years ago in the southeast Asia region.

What didn’t grow out were some nasty habits. Eating their own faeces for example… would seem not a good characteristic in a pet... but hey, maybe it makes sense in dog culture?

You and your girlfriend enjoy a little early morning wake up sex (as you do). Afterwards, both the condom and wrapper end up on the bedroom floor. You’ll lie in bed a while and pick it up once you get up. Sounds sweet, right?

You need coffee, so both get up.

Minutes later you hear a crinkling sound in the kitchen. Your dog’s chewing a condom wrapper. You take it off him and throw it away. Problem solved. Everything’s still good.

You go back to making coffee and then ask yourself: How did he get the wrapper? And if he got the wrapper… where was....

You run to the bedroom and look for the condom. What do you see? Nothing.

The Used Condom Has Vanished

"Babe! Did you do something with the condom?"

You already know what the answer’s gonna be.

“Our Dog Ate Our Condom!”

So What Should You Do? 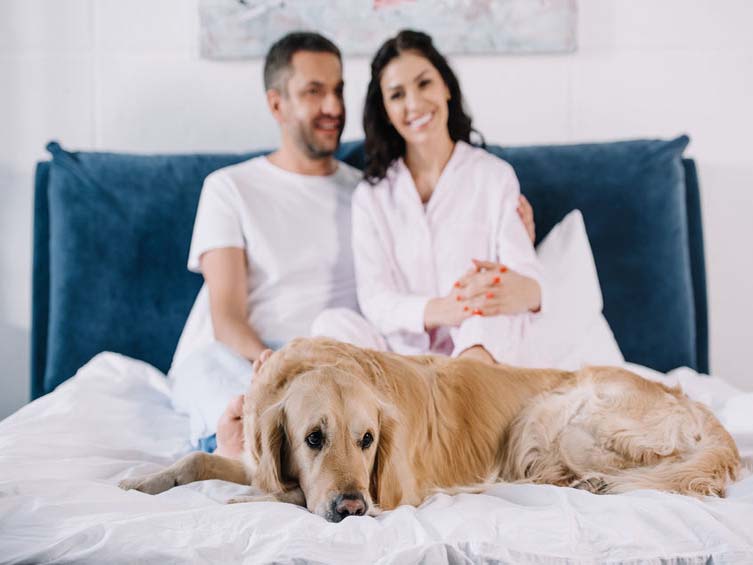 Don’t panic! Dogs consume, as we mentioned, many things which don’t seem like a good idea and nothing happens to them. The fact is many dogs have a cast iron constitution, and will pass a condom (and various other nasties) out when they poop.

But, that doesn’t mean it’s worth the risk. The best advice is always contact your vet as soon as possible. The vet will examine the dog and advise you on what to do. According to veterinarian Dr. Claire Jenkins, it usually comes down to size; both of the dog and the item swallowed.

“Any foreign object has the potential to be dangerous when eaten,” she says “Obviously it depends on the size of the object in comparison to your dog, so a condom might be okay to be passed by a full grown Labrador, but not, for example, a Chihuahua. While some objects go straight in one end and out the other, there’s also a chance of them getting stuck in the intestines and forming a blockage along the way.”

The vet may induce vomiting if less than two hours have passed, or simply have you monitor their appetite and bowel movements.

It can be up to 10 days before an object will pass though the animal.

Why on earth would a dog eat a condom? Well, dogs like to explore the world around them through their mouths and noses. When checking out something new, your dog can’t help but explore it… and that sometimes involves consumption. Also why your shoes often end up a tasty snack.

What Can You Do To Prevent Your Dog Eating Condoms?

Well, pick it up. Quickly. Don’t throw stuff on the ground that is sure to interest your dog. Like wolves, they are scavengers by nature. Because of this it’s worth treating your dog like a kid… keeping potentially dangerous things out of reach and have a solid rubbish bin with a good lid.

Oh yeah and provide lots of things your dog CAN chew on. If he ate your condom, he could just be trying to say he’s bored.

Condoms are for safe sex. Make sure you keep them safe and out of reach of your dog.You can find a  huge selection of condoms right here.