We are the foremost provider of retail and wholesale condoms online in Australia. We like to use our blog to provide information on everything about condoms. Today, we would like to go over the basics of how to use a condom. We are going to start from the beginning, as if you had never used a condom before.

Condoms fit over the penis and work by providing a barrier between the penis and whatever orifice it happens to be enjoying at the time. Condoms work equally well in the vagina, the anus and the mouth. Even though condoms prevent STI’s and unwanted pregnancies, some people like them because they make sex a lot less messy.

Condoms come in varying thicknesses, materials, sizes, tastes, textures and colours. Most condoms are made from latex, but if you have an allergy to latex, don’t despair. We have non-latex condoms available, too.

When Do You Need Condoms

It is recommended to use condoms in any sexual act that involves the exchange of bodily fluids. It is these bodily fluids that can cause STIs and unwanted pregnancies. Anytime you have casual sex, you should be using a condom.

How to Use a Condom

First of all, don’t let the penis touch the vagina or the anus before you put the condom on. Pre-ejaculates can cause STI’s and pregnancy. 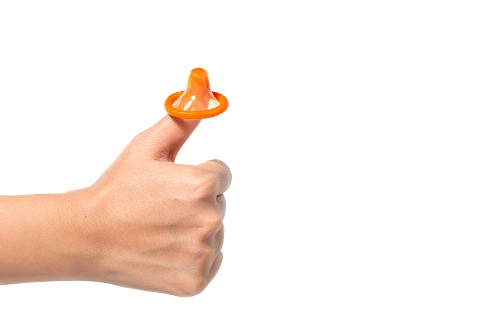 Make sure the condom is not out of date. Open the packet gently and don’t use sharp objects such as scissors, knives or teeth. We recommend lubricating both the inside and outside of the condom. This makes entry easier and makes it feel better on your end, too. However, if you are using a latex condom, don’t use an oil-based lubricant. Also, don’t put the condom on until you have an erection.

The condoms are rolled up. Make sure you have yours right side up and place it on the head of the penis. Pinch the top of the condom to leave some space for your ejaculation. This also helps ensure that there are no air bubbles. Then, simply roll the condom down the length of your penis. If your condom is on right side up, it will roll easily down your penis.

Take your condom off after you ejaculate but while your penis is still erect. Then tie the condom, wrap it up and throw it away. Don’t ever use a condom twice.

Check out our inventory. If you would like to buy retail condoms, put them in your cart and check out. The process is easy and your order will be shipped to you discreetly in unmarked postal satchels. For wholesale condom enquiries please phone us on 1300 4 CONDOMS (1300 4 266 366) or alternatively email us.