After Brexit, could the NHS run out of condoms and other forms of contraception?

As the real possibly of a no-deal Brexit looks more likely some citizens have already been stockpiling essential items such as medications and canned food. Should condoms be next?

Research carried out by the UK Department for Transport shows trucks face a 6 day queue to board ferries at Dover if checks take just 70 seconds extra per vehicle in the case of a no deal Brexit. Should these checks take longer it will result in permanent gridlock at this key border crossing.

Short Expiry Items May Be Hit

What hasn’t been looked at too deeply is what will happen to the UK’s supply of contraceptives – including condoms, and birth control pills – if the clock runs out and a no-deal Brexit situation occurs?

The UK NHS was actually one of the first health systems in the world to provide free contraception.

Remember control over fertility for all socio-economic groups was one of the leading factors which contributed to the emancipation of women: placing power back in women’s hands to decide when and where they would get pregnant. The widespread availability of the birth control pill and condoms led to the sexual freedom we all enjoy today.

So shortages… are likely to cause problems.

Most suppliers and manufacturers of contraceptives of all kinds are international companies, with head offices and manufacturing plants based out of the UK.

Durex, the most popular condom brand in the UK is manufactured in China, India, and Thailand. Bayer, the largest supplier of contraceptive pills, including the “morning after” pill is German. All will be subject to customs checks if there's no deal. Meaning: delays.

Boots the biggest chemist chain in the UK has already been making contingency plans and stockpiling up to 6 weeks of additional stock of medicines and medical products. But stockpiles can also run out.

Increased transmission of STIs and a higher rate of unplanned pregnancies could end up being a lasting impact of poor political leadership and the inability to come to consensus. 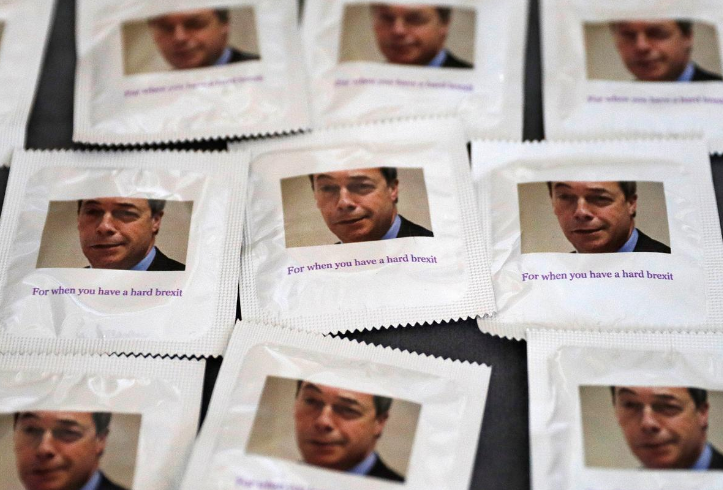 In Event of a Hard BREXIT...

UKIP, UK’s Eurosceptic party and leading proponents of Brexit may have the solution.

At their 2018 conference among the many UKIP branded merchandise for sale were condoms bearing the image of former leader, Nigel Farage.

“For when you have a hard Brexit”

Purchasing direct from us means you get the best range of condoms in Australia, better value for money, and you’ll have them mailed in secure, discrete packaging straight to your door. Find the right condom for you and click the buy now button. Maybe buy a few extra packs and send them to your friends in the UK. They might be needing them.