If you are looking for a Four Seasons Condoms wholesaler, you have landed on the right page. We offer Four Seasons Condoms wholesale in 18 different sizes and flavours. They come in quantities of 144 condoms and are sent to your home in Australian Post registered satchels. The satchels have no mention of the products or the website name. It is quick, easy and discreet to order condoms online from CondomSales.com.au. 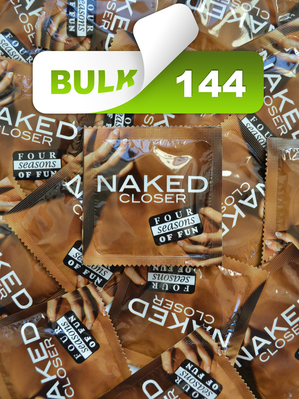 These condoms are slim for a tight fit, ultra sensitive and lubricated. Our tightest size.

This is a slightly larger than standard fit condom with the Four Seasons pleasure-enhancing additive called “Shiver.” It will make you shiver up and down your spine.

This is the second-largest Four Seasons condom. It is made for people with larger penises. Designed for sensitivity while remaining strong.

If you are a giant, this is the condom for you. It is the largest condom made by Four Seasons.

Extra strength condoms are thicker than standard condoms. This not only keeps them from breaking under extreme conditions, but it also makes you last longer because they are less sensitive.

Four Seasons Naked Ribbed Condoms are so sheer that you may forget you are wearing a condom.

Four Seasons Studded and Ribbed Condoms have studs and ribs for heightened stimulation.

You can order online here. If you have any questions, use the “contact us” link.