"I knew as soon as I heard the snap [that the condom was off] ... I didn't want to believe what I'd heard so I kept going. It wasn't until we changed positions that I let it register what had just happened. Panic, dismay, and fury set in all at once, and I actually remember crying and shouting at him. I asked him why, repeatedly, even after he answered me trying to rationalize it.” 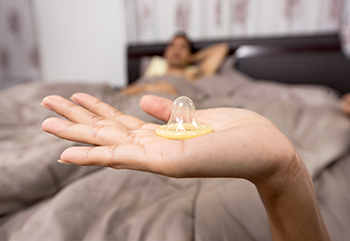 Stealthing is the purposeful removal of a condom during sex without the consent of your partner. In many countries it’s now a crime.

In Australia? Well, the law is a little murky.

“Removing a condom after there’s been a prior agreement that a condom is going to be used, basically undoes that agreement. Because there is no consent,” says NSW law society president Pauline Wright—arguing that stealthing is essentially a form of sexual assault due to the removal of consent.

“If a man obtains consent by saying, ‘look if you do have sex with me I’ll wear a condom’, but always intended that he was going to take it off, then he’s obtained that consent by fraud, and that is going to amount to an offence in NSW, because it’s clearly undoing the consent.”

Sexual offence legislation differs depending on which state or territory you are in. The one thing that’s consistent is there’s nothing specific about removing a condom without consent in any legislation, anywhere. So as far as the Australian legal system is concerned the legality of stealthing is very much on a case by case basis.

In other countries it’s clearer cut. In January 2017, a 47-year-old man in Switzerland was convicted of rape for removing a condom without consent during sex. In the UK it is considered a crime, and stealthers could also face a rape charge.

What about the man’s point of view?

Why do it? Brendan, says it’s because it feels better with no condom on. “I really don't want to get them pregnant so I definitely wouldn't be leaving a trace. As for STIs, I don't want to get them but I would run the risk,” he says. “I don't think I really make an agreement. I just put one on and if nothing is said I take it off. I don't think it's breaking the law.”

Better check with the legal experts on that buddy!

“It is not a sexual assault if someone refuses to wear a condom,” says Lina Howlett, NSW sex crimes squad commander. “It becomes a sexual assault when consent is not given or withdrawn. Eg they are having consensual sex and one party becomes aware that the condom was removed and tells the partner to stop and the partner continues.”

Stealthing is definitely dangerous and can lead to unwanted pregnancy or transmission of potentially life changing STIs.

The bottom line is if you think your consent has been violated, you should get a sexual health check-up and depending on the circumstances, consider reporting it to police.

There’s no excuse. We have the best range of condoms in Australia. Purchasing online means you can read up on product descriptions, and check out specs. Click the Buy Now button—you’ll receive quick discrete delivery.

Be safe, be legal and find the best condom for you!