Although various types of condoms had been in existence going back to prehistory (goat’s bladder, anyone?), the modern condom we know and love didn’t really come into existence until 1855.

This new age of the condom was brought about by the magical invention of the rubber vulcanization process by Charles Goodyear in 1844. Named after Vulcan, the Roman god of fire, vulcanization is the chemical process of converting natural rubber into something more durable and lasting by combining it with sulphur or some such additive. 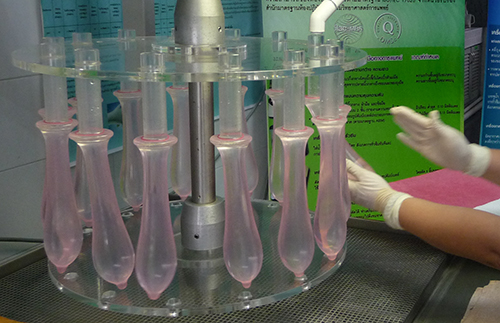 At last contraception arrived on a grand scale!

These rubber condoms were manufactured by covering penis-shaped moulds with strips of raw rubber, then dipping them in a chemical solution to vulcanize (or cure) the rubber.

Only drawback: they were about the thickness of bicycle inner tubes. Effective if not enjoyable.

In 1912, a German named Julius Fromm took charge and came up with a slightly improved manufacturing technique: dipping glass condom moulds into a raw rubber solution. Called cement dipping, this method involved adding gasoline to the rubber to liquefy it.

End result: rubber diameter came down (but not that much). Probably didn't smell too good either.

Latex to the rescue

Those longing for thinner condoms would have to wait until latex was invented in 1920. The Oxford dictionary defines latex as: synthetic colloidal polymers suspended in an aqueous solution.

Latex condoms meant manufacturers no longer had to worry about their factories full of highly dangerous, and noxious chemicals spontaneously catching fire—and for the average Joe, latex meant thinner condoms with a longer shelf life (rubber predecessors lasted no more than 3 months after they were made). No saving up for a rainy day unfortunately.

Latex is still the substance of choice today. Advances in manufacturing technology has meant condoms have continued to become stronger, thinner and more durable.

The transformation of the condom, from a piece of animal bladder to a bike tube, to a light latex sheath, has made it one of modern society’s most produced (and popular) items—with over 18 billion condoms made and consumed each year.


You can search the best range of condoms in Australia right here. Don’t worry, no bike tubes! You can easily find for the type, colour (or flavour) you like and purchase quickly and simply. Just click the buy now button. Your condoms will be delivered quickly and discreetly.