We love our job as the foremost distributor of retail and wholesale condoms online in Australia. But sometimes we come across jobs that sound even more fun than ours: testing condoms.

Steve Abbott lives in England and is their unofficial official condom tester. Officially, he is an engineer at the British Standards Institute in the personal protective equipment department. His job is basically to blow up condoms to the tune of 3,000 per week.

Condoms that pass all of his tests receive the prestigious Kitemark symbol, which is England's most respected seal of approval. Condoms are tested for many different metrics, including size, length and accuracy of labeling. They must also be free of holes and have instructions on the package.

But probably the most entertaining test is filling them with air to see if they explode or not. Depending on size, condoms must be able to hold between 16 and 22 litres of air to receive a Kitemark. Most of the high-quality condoms on the market can take as many as 45 liters of air before they finally explode. This means they are blown up to the size of a full size dachshund.

While the CE is the official European seal of approval, many products such as condoms are under consumer pressure to also receive Kitemarks. Durex, who are the largest manufacturer of condoms in the world, use the Kitemark. 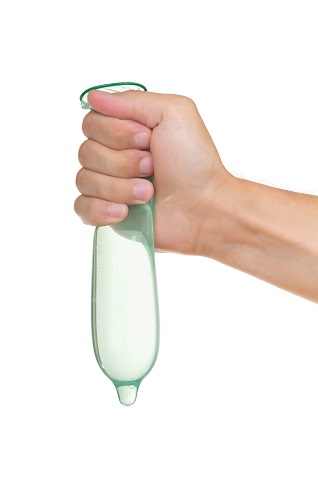 Condoms have two main tests to pass: the burst volume & pressure test and the freedom from pinhole test. The burst volume and pressure test is as described above. The freedom from pinhole test is slightly more involved. First, the condom is filled with 300ml of water. Then it is rolled around on a piece of blotting-paper. If any water goes through the condom on to the blotting-paper, the condom fails the test.

You can always be sure that any of our condoms have undergone stringent factory testing and are safe and reliable for use. Check out our selection and try us out for yourself.