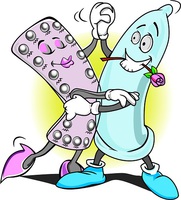 What better place to learn about Victorian Era condoms but online? The Internet is truly a wonderful thing. Recently, a Gizmodo segment called “io9” featured two women in their laboratory making condoms from a 19th century recipe. Here is the recipe and the results.

This is the “blind end” of a sheep intestine.

Soak in water, repeat on both sides.

This was easily done.

Repeat in a “weak ley of soda” and repeat “five or six times.”

In current English, a “weak ley of soda” is lye.

Remove the mucus membrane with a nail.

They used a butter knife.

This was actually done with brimstone. They used a laboratory equivalent: potassium metabisulfite. The lab solution was much safer.

Cut to the Required Length

Unlike modern condoms, they had to guess at the length. They had a lot of fun.

Wash in clean water, then wash in soap and water, rinse, inflate and dry.
No problem. They used vinegar somewhere in the process. The drying process took a long time so they used a hair dryer.


Tie a Ribbon Around the Open End

The condom came out dry, and needed to be hydrated for use. It came out close to a modern condom, but with some major differences. Instead of the nice elastic top of a modern condom to keep it tight on the penis, a ribbon had to be used to keep it from sliding off.

They asked a few people, both male and female, if they would use the homemade condom. Most said “no,” but said “yes” if they were back in the 19th century and it was the only option.

Isn’t it great to live in a time where you can order condoms online? Call 1300 4 CONDOMS.